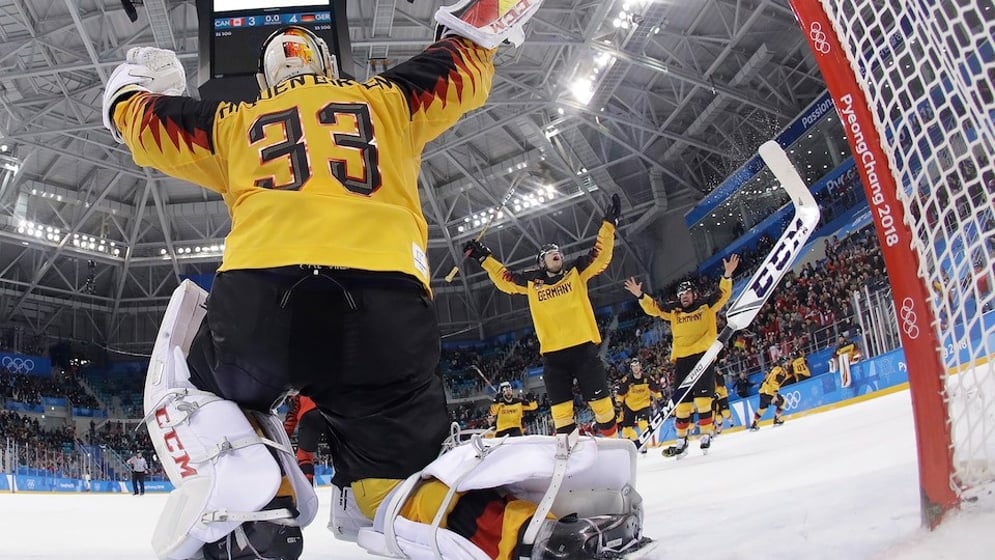 By: 2018 Getty Images
By: Jennifer Hoffman

It's the final day of competition in PyeongChang.

Medals will be given out in men's hockey, women's curling, bobsled and women's cross-country skiing.

After Team USA's "Miracurl on Ice" against Sweden in the men's gold-medal match yesterday, South Korea looks to pull off something similar on the women's side.

Germany can leave PyeongChang on a massive high note, as it has a chance to win gold in two events: men's hockey and men's bobsled.

After shocking the tournament by defeating Sweden in overtime, the German hockey team also took down two-time defending gold medalists Canada in the semifinals. Going up against a highly-favored, stacked Olympic Athletes from Russia team, Germany has nothing to lose.

In men's bobsled, Francesco Friedrich could become just the sixth pilot to win gold in both the two-man and four-man events. Canada and South Korea are looking to spoil the Germans' party, as they currently sit in second and fourth place, respectively, after the first day of competition. Figure skating events will also conclude with the exhibition gala.

Catch the final two runs of men's four-man bobsled tonight in Primetime. Germany's Francesco Friedrich tied for gold with Justin Kripps in the two-man event, but this time, Friedrich doesn't want to share. He piloted his German sled to first place and is leading by 0.29 seconds with two runs remaining.

However, South Korea and Canada could very well spoil the German podium party. Won Yun-jong piloted his Korean sled to second place and has put his country in position to win its first-ever bobsled medal. German Nico Walther's sled isn't far behind in third place, however, just 0.35 seconds back of Friedrich. Canadian Justin Kripp's sled is sitting in fourth place, only 0.23 seconds back of third place. Team USA has learned from its mistakes in two-man and jumped up three spots during the first two runs. Codie Bascue piloted his sled from 12th to ninth place and sits 0.53 out of medal contention. Nick Cunningham's sled is in 20th, and Justin Olsen's sled is right behind in 21st place.

All the medals have already been awarded, but figure skating isn't done just yet in PyeongChang. Catch all of your favorite skaters in the exhibition gala. The gala is one of the more popular events—and one of the most expensive. Next to the men's hockey finals, the gala has the second-highest ticket price.

In this event, the figure skaters can relax and perform routines that allow their personality to shine, instead of fulfilling techniques for the judges. Maia and Alex Shibutani will be Team USA's only representatives at the gala, where Canada's most decorated pair of Tessa Virtue and Scott Moir will be skating a tribute to Gord Downie: a muscian in the band Tragically Hip who passed away last year. Virtue and Moir's final performance will be set to the band's "Long Time Running."

Germany pulled off not one but two surprise upsets in PyeongChang. First it defeated Sweden in overtime—and now you can add Canada to that list. The Germans stunned Canada 4-3 on Friday to punch their ticket to their first gold medal game in men's hockey.

It's a true Cinderella story in the making, and Germany winning the gold medal doesn't seem as far-fetched as it used to.

The Germans didn't even qualify for the 2014 Games in Sochi, and they finished in 11th place in Vancouver. Their last Olympic hockey medal, a bronze in 1976, came when they were still known as West Germany. The team is now just one game away from having its best-ever finish on the international stage.

On the other hand, the Olympic Athletes from Russia were favorites from the start. A roster loaded with talent from top to bottom struggled in their Olympic opener, but the team quickly turned things around, cruising against every subsequent opponent.

Veteran goaltender Vasily Koshechkin stopped all 31 shots he faced against the Czechs to secure the 3-0 victory for OAR. He has allowed just six goals in five games and leads the tournament with two shutouts.

German net minder Danny aus den Birken has also been a force between the pipes, OAR's electric offense will be by far his toughest test of these Games.

Though technically not representing Russia, OAR is also seeking history of its own. The country last reached the Olympic final in 1998, when it lost to the Czech Republic. The team hasn't won gold since 1992, when it played as a unified Soviet squad.

In what could be a modern day Miracle on Ice, this is a game you don't want to miss.

Sweden and South Korea—the top two seeds in the round robin tournament—will face off in the gold medal match in women's curling. Sweden appears in its fourth straight final after defeating Great Britain 10-5 on Friday and is seeking its first gold medal since Vancouver. South Korea won seven straight matches to punch its ticket to the final. The hosts are already guaranteed the first curling medal in their history—we'll see if they can make it gold.

Catch the final two runs of men's four-man bobsled in Primetime tonight. Will Germany be able to complete the podium sweep and make history? Or will Canada and South Korea crash the party?

Watch the entire exhibition gala from start to finish in Primetime on NBC as well as on NBCOlympics.com and the NBC Sports app.

Catch Jessie Diggins, Sadie Bjornsen and Kikkan Randall in the last cross-country race in PyeongChang. Diggins and Randall already earned the first medal in women's cross country with a gold-winning performance in the team sprint—can they add another one to the list?